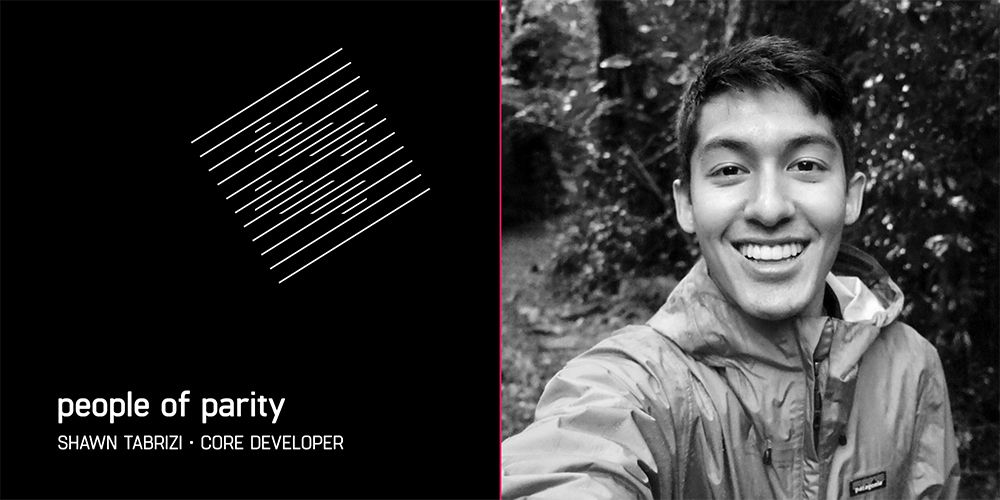 When Shawn Tabrizi (GitHub, Twitter) was at Microsoft, he would wait every day to go home and hack on Ethereum smart contracts. After reading Mastering Ethereum by Gavin Wood and Andreas Antonopoulos, Shawn wondered, “What is Gavin working on now?” This is how he ended up joining Parity.

Shawn’s upbeat enthusiasm is likable, and sometimes, like when presenting on Substrate at Web3 Summit this year, contagious.

I chatted with Shawn about what people are missing about Substrate, the Parity office as a second home, and his advice for dev applicants.

How do you describe Polkadot to friends?
I like to extend an analogy commonly used in the blockchain space which reflects back on the history of computing. Bitcoin is like the “calculator” of the blockchain world—a computational device, designed and built for a single purpose. Then Ethereum is like the blockchain equivalent to the first computer.

The first computers used to be the size of warehouses! Interactions from the outside world were limited for these machines, and they certainly could not interact with other computers! To me, Polkadot is like the first internet connection between these historic computers. Imagine being at Stanford or UCLA and seeing the first message passed on what would eventually become the internet. It was only after the internet that people discovered how important it would be for individuals to have their own gateway to this connected world.

The President of IBM once famously said, "I think there is a world market for about five computers," and the sentiment in some parts of the blockchain world today mirror those thoughts. When blockchains are costly to run and isolated from the outside world, of course it could be easy to justify the need of only a handful, and in some extreme cases, only one. But Polkadot’s vision is to bring interoperability to a world of many blockchains. To be part of that and know where it could go, that’s really exciting.

What do you think people often miss about Substrate?
Substrate is a tool we are building to solve some of the problems we are facing today. It’s a platform for building the underlying Polkadot relay chain, and even a platform to bootstrap an ecosystem of parachains.

What is exciting about Substrate is that we have put emphasis on designing and building it to be more generic and more extensible than our needs. This means that Substrate is set up to be a tool that can solve problems we haven’t even thought of yet!

In the short term, I suspect that Substrate will fill its intended role of making blockchain development as easy as possible, but this extra complexity is like building a language. If we only gave you paragraphs to work with, you would only be able to write the same novel over and over. But if we give you a language, a truly flexible toolbox of resources, you would be able to write completely new things.

I could imagine Substrate as a framework for research into game theory, governance, consensus algorithms, distributed systems, and more! Only recently have we actually been able to put to practice some of these concepts on existing blockchain systems. Now, with Substrate, it is easier than ever to iterate and build decentralized systems.

Coming to Parity, what was different from your expectations?
From Microsoft, with over one hundred thousand employees, to Parity, with under one hundred, I really did not know what to expect. I just knew that the quality of Parity’s output was the best in the industry and that they were building on the bleeding edge of bleeding edge. I wanted in on the secret sauce!

I didn’t know how well I would connect with other Parity employees beyond the crypto/blockchain world, but the friendships I have built here at Parity extend far beyond the things we work on. It seems like if you have the mindset of “let’s decentralize the world,” you probably agree on something much more fundamental. And it shows! The people at Parity seem to bond over their fundamental philosophies around technology and the world as a whole; as a result, we have some really interesting conversations. Connecting with coworkers at this level was much harder at Microsoft. Not everyone was working on exactly what they wanted, and people were not necessarily drawn to Microsoft based on their underlying view of the world. It really changes work dynamics at Parity in a positive way, and makes the office feel like a second home.

People always say, “Find a job you love, and you will never work a day in your life.” Parity is my first job where it doesn’t feel like work. One of the great things about the work culture at Parity is that you have the ability to investigate and work on topics that interest you! I think this, combined with a shared philosophy of technology, and a shared vision for solutions to these problems, may be the secret sauce behind the amazing quality of output that comes out of Parity.

What do you think of Berlin?
Berlin’s great! I have traveled a lot throughout my life, but I have never lived abroad. As someone from America, and having met so many people coming to America from other countries, I really wanted to experience life as an expat.

Because Parity has a work culture which supports remote workers, it’s totally fine to fly around and explore Europe on the weekend. I can leave on Friday, be at a new European city until Sunday, and Monday I can work from an airport while I wait for my flight home. Berlin is one of the center points of Europe, which means you get easy access to the rest of the world. Honestly, it couldn’t be better for someone who loves exploring the world!

You are part of the interview team for some job positions. Do you have any advice for people applying to Parity (or anywhere else, for that matter)?
It’s easy to talk about your passion for open source and being a team player during the application process, but I personally value looking at the things you did before you applied way more. What were the projects you built in your free time? Can I see them on your GitHub? Do you participate on StackOverflow? In general, I look for people who can express their passion of technology through their actions, not just their words.

Also, for most technical roles, we have the users complete a take-home project to help evaluate their abilities. I think a lot of people go wrong picking a project like building a runtime module for Substrate when they are both not familiar with Rust and not familiar with Substrate. Unfortunately, it would be impossible to evaluate someone’s real potential when they are nerfed so hard from the get go. Instead, pick a project in which you feel like an expert and which shows off your full potential. Ideally, something tangential to the work we do here at Parity, but in a way you feel comfortable.

What’s your advice to people joining Parity?
At Parity, there truly is no such thing as a dumb question. We actually have a special chat dedicated to “dumb” questions, and it is one of the most active channels. The speed at which things move at Parity makes it impossible for any one person to really have a good understanding of all the moving pieces. Everyone at Parity is a resource you can depend on!

This also means that you need to make noise if you need help. If you run into an issue, the worst thing you can do is sit there and struggle. We don’t really have regular meetings at Parity, so if you’re not reaching out, you may get left behind.

Also, you need to set up your own plan for success. Parity work culture facilitates all different kinds of work personalities to be successful, but it also can cause problems for those who jump around a lot and never really get to the finish line on anything. The best way to solve this that I have found is to set expectations for myself on what I want to get done and when.

What are you most looking forward to in your next year at Parity?
Certainly the wave of parachain development that will come after the release of the Polkadot network. While many see the release the Polkadot network as a milestone/finish line, I see it as the beginning of the next wave of awesome development on Substrate. I am hopeful that the publicity around releasing a new network may draw interested minds to start poking around the Substrate development world, and I think just seeing what is possible will be enough to convince new users to start building their next project with Substrate.